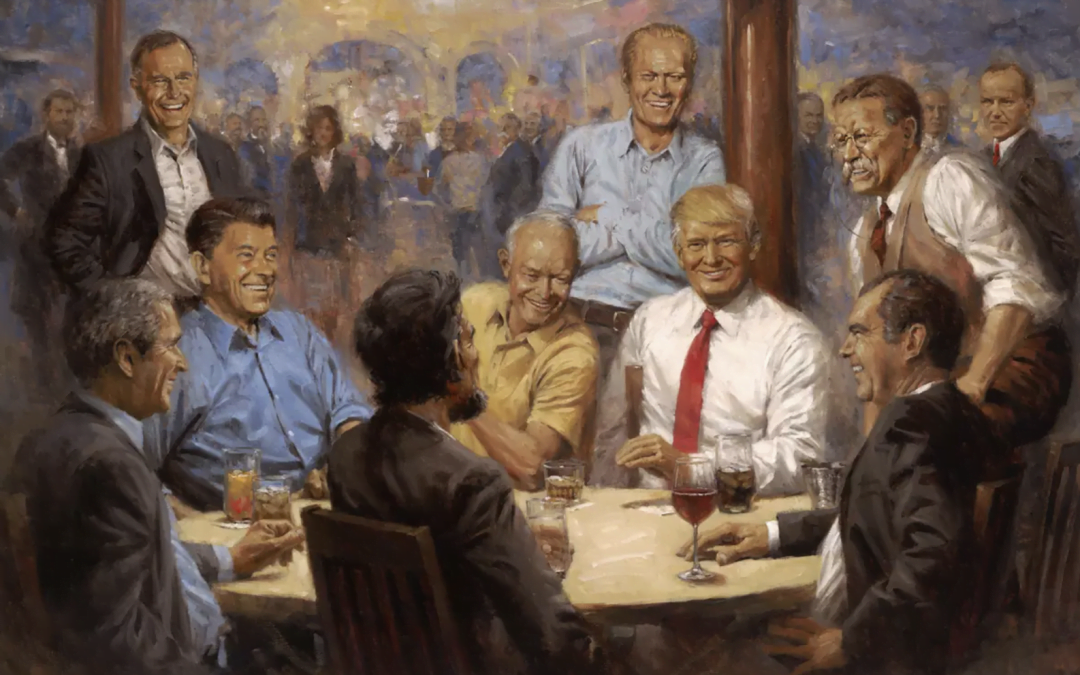 When it came time to update his hugely popular painting of Republican presidents, Andy Thomas struggled with how to fit Donald Trump in, but he knew that he belonged at the center of the frame.

A self-taught cowboy painter in southwest Missouri, Thomas stressed that he’s no political expert, so he wasn’t quite sure how the 45th president would be received by his predecessors in an imagined meeting.

“He’s outside the norm of Republicans and that makes it kind of interesting,” he told TIME. “Is he going to end up going in history as a great Republican or an abnormality or something? So it’s interesting. I just put him at the table, more or less the center of attention. We’ll let history decide. Or let the people decide. It’s not up to me.”

Thomas said Trump was a little hard to paint because his light hair, tan skin and lack of dark recesses under his eyes make his face mostly just “a light warm color.” He also found it hard to give Trump a “genuine smile,” and had to redo the painting after his first take seemed off.
Titled “The Republican Club,” the painting features Trump sitting at a table with GOP presidents Abraham Lincoln, Teddy Roosevelt, Dwight Eisenhower, Richard Nixon, Gerald Ford, Ronald Reagan and both Bushes. History buffs can also spot lesser-known GOP presidents such as Warren G. Harding in the crowd in the background as well.

The addition of a crowd in the background also led Thomas, an independent-minded Midwesterner who’s a fan of both Reagan and Bill Clinton, to add a subtle feminist message: A woman with indistinct features walking directly toward the table.

The same woman also appears in a separate painting, “The Democratic Club,” that Thomas just finished.

“That will be the first Republican female president and the first Democratic female president,” he explained. “As I was doing the painting, I was thinking that these guys are kind of intimidating in a way. That’s the kind of woman that will be our first woman president; she’ll walk right up to that table.”

Prints of the two paintings, revealed exclusively to TIME for the first time, will go on sale sometime before the summer.

Thomas began the paintings a little before the holidays, but he said the decision to include a woman was not a commentary on Trump or the revelations about sexual misconduct among political and business leaders at the time.

Instead, he said it grew out of a more artistic decision. Made in 2008 at the suggestion of a gallery owner, his first political paintings featured eight Republican presidents and eight Democrats playing poker around a table at what appears to be a political convention. When giclee prints of those paintings turned out to be extremely popular in gift shops and galleries, he did a follow-up of the presidents playing pool, but he felt it was too closed-off and a little undemocratic.

That led him to the decision to add a group of people in the background, which along the way led him to decide a woman would approach the table.

“I’m an old-fashioned male,” he said. “But there’s a feeling of a good old boy’s network that I wanted to dispel. It just kind of came about.”

Thomas, who has a son, three daughters and two stepsons, did admit one inspiration for the idea, however: His daughter, Jenny, who works in management at a manufacturing company.

“Jenny would do that,” he said. “She’d walk right up there.”