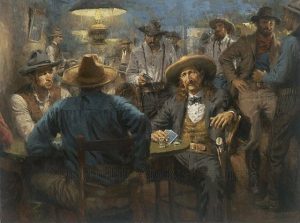 Wild Bill Hickok was playing poker at Nuttal & Mann’s Saloon in Deadwood, Dakota Territory, on August 2, 1876 when Jack McCall shot him in the back of the head, killing him instantly. After a life of gambling, gunplay and notoriety, Wild Bill’s tragic death mirrored his life.   Hickok was holding two aces and two eights when he was shot. Those cards are now called a “dead man’s hand”.  McCall was eventually hung for the shooting although he was initially acquitted in an unauthorized trial. His motive is unknown. 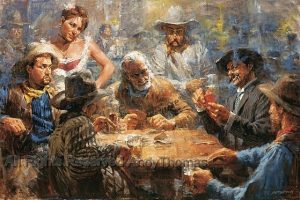 Early in the evening, the Welshman was sure he had an easy mark. He had, it was clear to see now, underestimated the old trapper. When he had raised the pot for the big strike, the trapper had pulled yet another gold piece from his beaded pouch and called his bluff. Those soft gray eyes peered out from under the aged lids and missed nothing, and that put the pinch on the Welshman’s game. When the cowboys joined the table, he was sure the situation would improve since their reckless play always fattened his pocket. Alas, the trapper seemed to inspire them to play their cards close, and now the Welshman was feeling the pressure. The cowboy called Breaker, a fair card player on most nights, was showing some real skill tonight even with the animated Pearl perched on him.

Now, with the biggest pot of the evening at stake, he was holding what should be the winning hand. But then, as he scanned the table and wasn’t sure who could be called the Mark, he smiled to himself and thought, Perhaps it’s me. 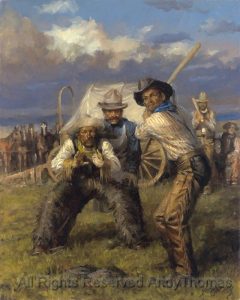 There were tough, long days as a working cowboy and it was always a fun time when there was a bit of a break. That’s when they’d pull out the cowboy baseball equipment and have some fun. You just never know what they would use for home-plate.

The Death of John Dillinger

The history of Chicago is rich with many things but none so interesting as the subject of gangsters that controlled the streets, businesses, and city.

Among these gangsters is the great John Dillinger. Great in the fact that he was able to evade the city police for many months until that one night, outside the Theater they shot him down. As he walked out of the theater with the infamous Lady in Red by his side the officials were waiting and took him down the side alley and plummeted him.

Looking for a professional giclee print? Contact our studio in Carthage, MO today!