The 4th of July festivities continue at Andy Thomas Fine Art – that’s why we’ve rounded up our favorite Americana art reproductions that are available online and through our Andy Thomas wholesellers! 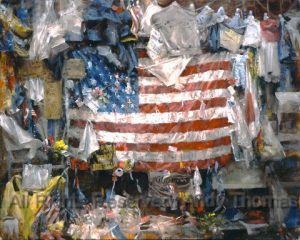 This painting was from the scene of the church fence right outside of Ground Zero, in New York. 9-11 brought these tokens, notes and letters. The church housed volunteers, firemen and others for some sleep.

Andy recalls, “I believe the original hangings were posters or photos that families put up in hopes of finding news of a lost loved one. Then there were mementos from volunteers or agencies that helped in rescue efforts. Finally, of course, virtually any visitor (American or foreign) wanted to leave something maybe a button from the Lions Club of a small town in Mississippi, for instance.

On this long stretch of fence was this short section I have painted. I didn’t see the beauty in it at the time but my wife Dina did and was compelled to take this picture. We were overwhelmed when we saw this print. As I painted, I began to realize that the dozens of hands that placed the items in this section had created a nearly perfect composition, with light and dark masses plus bits of detail and contrast to make the eye move. This was all accomplished without obscuring the central design of the flag. How did this happen? Did each contributor, as they went to place a ribbon, or whatever they had, find a spot that looked good with everything else? Maybe they placed it one spot and thought it seemed wrong so they moved it.

I believe that each person who added something placed great importance on the act. They couldn’t bring those who died back to life and they couldn’t help in any tangible way to heal or rebuild. They could, however, hang a button or leave a T-shirt with a message. And they did that very well.” 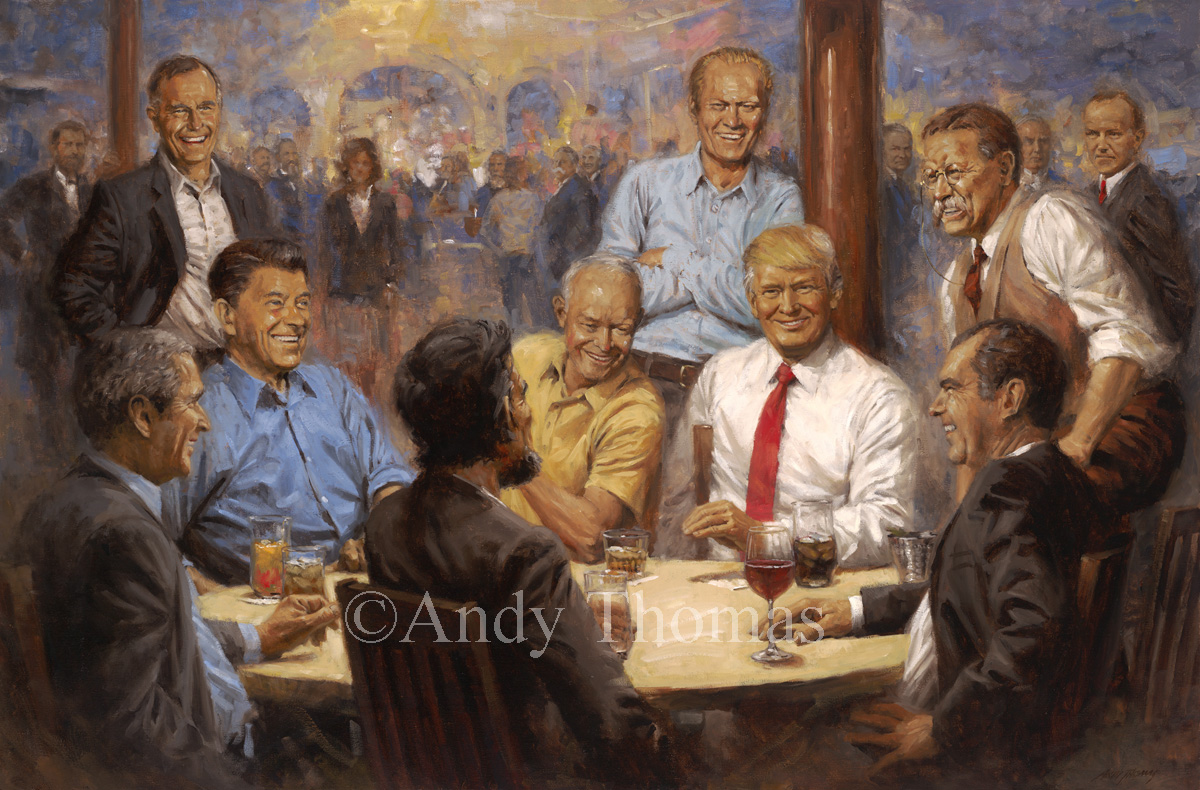 Here you have an inside view of the Republican Club. They are all just having a casual talk around the table while other past greats are reminiscing in the back of the classic club. Wait, this is a club of all the past men who served as a Republican United States President! Who could that female be walking directly to the table? One can only guess. 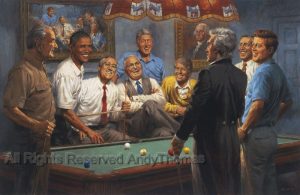 What better image to own than the Democratic Presidents Playing Pool?

With George Washington looking over their shoulders and True Blues hanging on the wall! 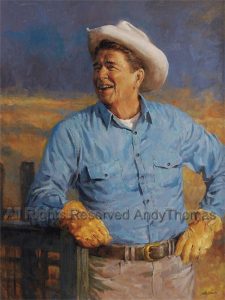 President Reagan loved the outdoors and relished the times he spent on his ranch near Santa Barbara. Called Rancho del Cielo (Ranch in the Sky), this retreat conveyed the true spirit of Reagan’s practical, down-to-earth manner and his core principles: humility, idealism, diligence, and hard work.

In this wonderful portrait by Andy Thomas, perhaps President Reagan had just finished one of his favorite activities at his ranch such as chopping wood or riding his horse.  President Reagan genuinely loved his country and proudly told the world that he looked upon America as a great “shining city on a hill.” As the commander-in-Chief of America, Reagan boldly endorsed a “peace through strength” policy that served and protected the world.

Known as “the great communicator,” Reagan possessed an excellent speaking ability, sense of humor, and beloved wit. Many wonderful quotes have been attributed to President Reagan; here are but a couple: “If we forget that we’re one nation under God, then we will be a nation gone under.”……”Whatever else history may say about me when I’m gone, I hope it will record that I appealed to your best hopes, not your worst fears; to your confidence rather than your doubts. My dream is that you will travel the road ahead with liberty’s lamp guiding you.”

See an art reproduction you’d love to have? Contact Andy Thomas Fine Art today for more information regarding the piece.