The Trail of Tears in Springfield 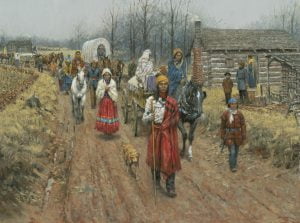 The Cherokee Cannon detachment of the Trail of Tears passed through the growing village of Springfield on December 16, 1837.  They did not pass by the active downtown area.
I chose to show the people with an aura of pride and determination, particularly through the postures and expressions of the man and his son in the foreground.  The history of the tribe after the migration is remarkable. They did, however, suffer greatly on the trail. 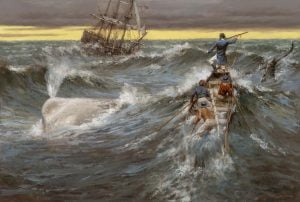 Have you ever seen the old movie Moby Dick?

Captain Ahab raises his harpoon to finally hook his obsession, Moby Dick, the great white whale. He does this in spite of his sinking whaleboat and his sinking ship.  Those who are familiar with Melville’s tale know what happens next; the harpoon’s line ensnares Ahab and he is pulled into the sea.

Many view Moby Dick as a near-mythological but Melville really didn’t stray far from reality to create his beast. There was Mocha Dick, a vicious white whale finally caught in the 1830’s. The whaling ship Essex was struck and sunk by a vindictive whale in 1820.  Many whales were known to attack whaleboats.  I’m sure, too, that whaling ships had their share of lunatic captains. 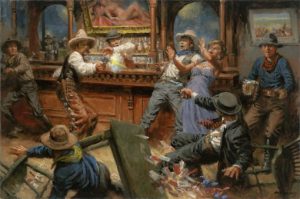 While a great game of poker was going on, a full fight broke out which caused us to have a bad deal. Looking back, we sure are glad we were part of the flying poker table rather than those boys caught up in that fight. Boy, was that a bad deal.

Look Who’s Here is a genuinely fun image. Here you will find the bar room filled with many of the classic Hollywood movie stars.

What fun it would be to have this image in your gallery or frame shop and have people try to name them!  Scenes like this and …and the Band Played on set Andy Thomas apart from other artists. They are original, fun and can make a conversation every time someone looks at one.

Who can you name?

We have a key if you need some help? Just ask for one when you order a copy for your wall! 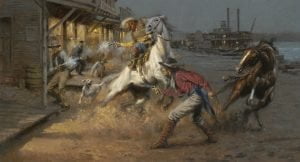 The night has turned violent in the volatile mix of alcohol, girls and gambling.

Madame Dumont was widely known throughout the West. She primarily was known as a gambler who was entirely honest and even beloved.

History remembers her as “Madame Moustache” for the noticeable hair on her upper lip that grew more pronounced as she aged.

Ready to add a new piece of art to your collection? We welcome you to order an original painting, or art reproduction of Andy’s western, historical, Americana art online at andythomas.com.